WHY IT MATTERS TO YOU

Virtual reality can transplant users into any manner of amazing, exotic locations — so why would you want to use it to put yourself in the shoes of a retail employee on the most stressful shopping day of the year? If you’re Walmart, the answer is obvious: training.

Thanks to a handy assist from Stivr — a VR company that has previously used its tech to help NFL players train — Walmart has announced that its 200 “Walmart Academy” training centers will be using virtual reality training by the end of the year. And, yes, this includes a VR version of Black Friday.

“For the past several months, we have been testing VR at 31 Walmart Academies, which are the regionalized training facilities Walmart uses to train new and existing employees,” Danny Belch, vice president of strategy, sales & marketing at Stivr, told Digital Trends. “By the end of 2017, VR will be at all 200 of Walmart’s Academies. Over 140,000 Walmart employees will get to experience VR every year as a result of using it in the Academy system, which is one of the largest, if not the largest, VR rollouts in the history of virtual reality. Walmart has displayed incredible innovation in choosing to utilize VR in this way, and it has been really fun working with their team over the last several months.”

But why exactly is a Black Friday simulator necessary? Belch says that the Stivr team recommends VR when a training scenario might be prohibitively dangerous or expensive to carry out in the real world. But despite how much loot Black Friday brings in, he notes that the virtual reality setups the team has developed go way beyond preparing for just one shopping day.

“That is only one small part of what Walmart is doing with training in VR,” he said. “We have created a library of virtual content that addresses lots of different scenarios a Walmart employee may encounter on a daily basis in his or her job. These range from spotting errors in different parts of a store to engaging in different types of customer service modules. The general idea is to give employees more repetitions at the mental decisions they have to make on a daily basis, which in turn will lead to a better experience for all Walmart customers.” 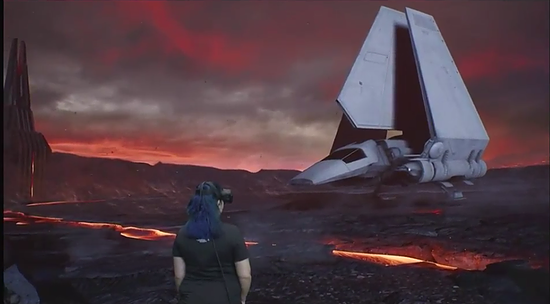